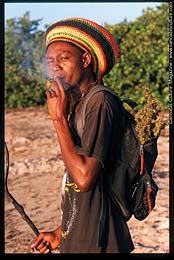 Photo Is For Illustrative Purposes Only

On Thursday September 4th 2008 Police were conducting routine patrol in the Ogee Ghaut area when they saw an unknown male carrying something on his head wrapped in a large cloth. When the unknown man saw the police he dropped the bundle and ran. A search of the cloth revealed that the man was carrying over 100 marijuana plants which ranged in height from six to seven feet and carried a street value of $10,000.00. The plants were taken into custody and investigations are ongoing.

Operations were also conducted by the Police on Nevis in the Cotton Ground area on Thursday 4th September 2008 and 99 marijuana plants were found growing on a plot of land. The plants, which range in height from one foot to six feet were uprooted and taken into custody. No one was held accountable for the find.