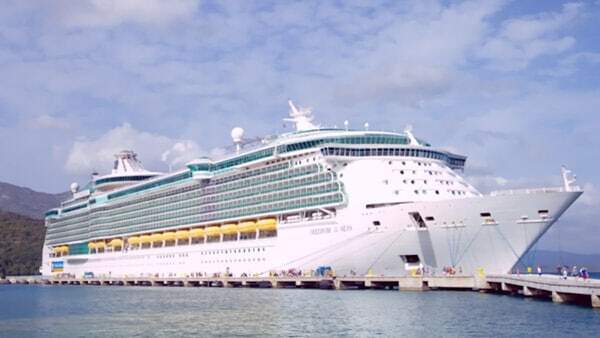 Freedom of The Seas – Royal Caribbean

St. Kitts and Nevis made history on Monday, July 16, by being recognized by The Florida-Caribbean Cruise Association (FCCA) as a marquee tourist destination with the arrival of the one millionth cruise passenger to grace the shores of the twin island Federation.

Speaking at a plaque exchange ceremony to mark the significant event today, July 16, on board the Royal Caribbean International’s Freedom of the Seas, CEO of the St. Kitts Tourism Authority, Raquel Browne, stated that achieving the milestone was no coincidence as they have worked tirelessly with Royal Caribbean.

Minister of Tourism, the Honourable Lindsay Grant, stated that the arrival marked a momentous occasion for St. Kitts and Nevis.

“We are celebrating the arrival of one million cruise passengers to our shores for the first time in our history. I think it’s testament to our marketing strategy, the strengths of our relationships with the cruise lines and our unique appeal of our growing tourism product,” he said.

Having reached this millionth passenger landmark, he said, St. Kitts is now considered by the cruise lines to be a marquee port.

“We’ve been waiting for this day for a very long time and we finally made it,” said Minister Grant. “We’ve made it not by the strength of the Ministry of Tourism, but by all the players and all the stakeholders all across St. Kitts and Nevis [from] the craft vendors, the aloe rub vendors, the taxi drivers [to] the tour operators –all those stakeholders who make our work so much easier. We want to thank them.”

Royal Caribbean’s vessel brands including the Royal Caribbean Celebrity and Azamara Cruise Lines have made a total of 102 port calls so far this year. They have brought for the year over 350,000 passengers to the island.

Minister Grant said that the government is extremely proud and grateful that Royal Caribbean has blessed the island with their visits.

The government is moving in the right direction, said the tourism minister, adding that with the help of Royal Caribbean as a major stakeholder it will continue to move forward.

“Today we celebrate with not only St. Kitts and Nevis, but with Royal Caribbean,” said Minister Grant.

Federico Gonzalez, who is the Associate Vice President of Government Relations for Latin America, the Caribbean and South Florida for Royal Caribbean Cruises Ltd., said that the journey to achieve the marque status has been filled with emotions.

“We have had happy and sad days through the process and some difficult ones, but one thing that we always had was the total commitment from the people of St. Kitts’ tourism industry and Royal Caribbean,” he said. He added that the two entities have been great partners.