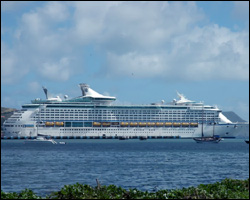 Royal Caribbean’s – Explorer Of The Seas
Photo By Erasmus Williams

St. Kitts’ Port Zante will remain on Royal Caribbean International Explorer of the Seas itinerary for the winter 2013-14 season.

In making the announcement, Royal Caribbean said Explorer of the Seas said there is a total of 22 sailings on 16 itineraries to eight tropical ports.

Vacationers also can choose a range of nine- or 10-night itineraries that take guests to three paradisiacal Eastern Caribbean ports, plus Labadee, Royal Caribbean’s private beach destination on the north coast of Haiti.

The 3,840-passenger capacity Explorer of the Seas made a total of six calls during the 2012-2013 cruise ship season.