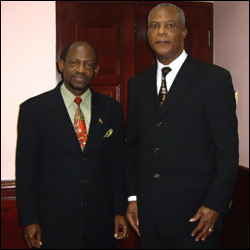 Justice Rawlins, a national of St. Kitts and Nevis was in the Federation to attend the annual Conference of the Judges and Registrars of the Eastern Caribbean Supreme Court at the St. Kitts Marriott Resort and Royal Beach Casino at Frigate Bay.

Justice Rawlins, who was born in Nevis, had been serving as a Court of Appeal Judge since 2005 and has held many legal positions for the past two decades having worked as Crown Counsel, Registrar/Magistrate, Solicitor General, and Master before his elevation to a High Court Judge in 2002.

Justice Rawlins was also a schoolteacher and labour commissioner before he studied law. He later became a lecturer in law at the University of the West Indies between 1995 and 2000. He was called to the Bar in St. Kitts and Nevis in 1985 after completing his LLB degree and his Certificate in Legal Education at the Norman Manley Law School in Jamaica.