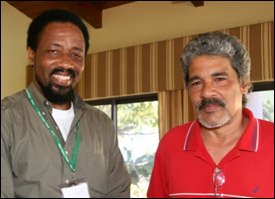 An official of the Dominica Government praised Nevis for its decision to host the 1st Geothermal Conference in the Caribbean. Chief Technical Officer in the Ministry of Energy Public Utilities and Ports Mr. Lucien Blackmore said the well planned and executed event, provided limitless gains for Dominica’s geothermal energy plans.

Mr. Blackmore, who was accompanied by Senior Projects Officer Mr. Michael Fadelle, told the Department of Information at the close of the three-day conference on Friday, that Dominica was also pursuing an aggressive energy development policy for the development of the island’s resources.

“The gains from this week’s session I think are limitlessï¿½ I thiink the gains for coming to Nevis cannot be overstated. It was very much invaluable and based on what I know where we are in Dominica, we will benefit tremendously from the conference,” he said.

Mr. Blackmore explained that the meeting provided Dominica with an opportunity to broaden its base, establish networks necessary to build and enhance capacity, to take stock of where they were, what needed to be done and how it should be done in an informed way.

“We have to ensure that we have the necessary requisite in terms of human capital base, so training and development is going to be very important for us.

“We had the opportunity to get exposure to the various programmes that [University of Auckland] offered globally and learn about the best practices. We want to ensure that we have world class standards as far as the entire development and the whole control mechanism is concerned,” he said.

Meantime, Mr. Blackmore explained that Dominica had been pursuing two sites where geothermal explorations were about to commence. He noted that the Nevis experience provided a good template that would stimulate thinking, modify and fine tune their level of framework and readiness for the next phase.

The Dominica Government Official said the conference brought together key stakeholders involved in the geothermal industry in the world and the region which augured well for the Caribbean.

He said the collective collaboration with others in the Caribbean would provide the requisite size and mass which would give greater impact on the international stage.

“The technology and the geothermal industry is relatively new within the region so we cannot get it right until we make sure we have established the right relationships with the various persons around the world, who have the knowledge and the experience and the financing,” he said.