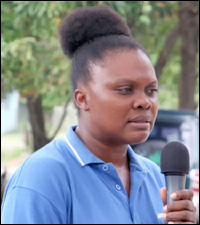 “I would really like to have as many persons visiting us at the college fair. We’ll be having quite a few schools who will be promoting distance education so have no fear, they’ll be here.”

Those were the words of Head Librarian at the Charlestown Public Library, Mrs. Lornette Hanley, in a recent interview with the Department of Information as she spoke about plans toward the hosting of the sixth biennial International College Fair.

Under the theme “UAspire, UApply, UAchieve,” representatives from colleges and universities in Florida and New York as well as the Caribbean region will be present at the November 17th event.

The fair, which will be held at the Methodist Conference Centre in Charlestown, will commence at 10:00 am and will be opened to members of the general public, including secondary school and Sixth Form students.

According to Mrs. Hanley, many of the colleges that will be present at College Fair 2010 are in the business of promoting distance education. She is therefore issuing a special invitation to non-students to attend the event.

“I am hopeful that we’ll have not just the students per se in terms of age, but also the older persons in their late 20s, early 30s, even 40s, who want to pursue education by distance. They’ll be there to answer your questions.

“For those of you who might be fearful or saying I don’t have enough money to attend a university, you can actually do it by distance,” she said.

Mrs. Hanley said that although she had not secured the participation of many institutions from the United States mainland, she was excited about the progression of plans thus far and saw it necessary to feature the institutions that a large number of Nevisians are likely to attend.

Monroe College, according to Mrs. Hanley had been absent from the fair for a number of years but she was pleased that its administrators had confirmed the college’s participation this year.

“We have had quite a number of students being able to get scholarships for those same universities. They have been able to come back and do their own one on one because they are now seeing Nevis as a fresh market and they find that they have been successful in getting students. I think that’s the bottom line,” Mrs. Hanley explained.

The International College Fair, according to the Head Librarian, aims at bringing the universities closer to the island’s students, informing college representatives of Nevis’ education system, highlighting that there are intelligent students on Nevis and promoting the island to persons who may not have heard of it.

In light of the numerous reported cases of Nevisian students experiencing transfer evaluation difficulties, Mrs. Hanley said it is her hope that the College Fair will help to address that situation, thereby making it easier for Nevisian students.

“Nevis is no longer in isolation I must say, because I am even surprise when I attend Education USA conferences of the many persons who ask about a fellow Nevisian, so Nevis is getting out there and I think that is one of the important stories that we like to share,” Mrs. Hanley said.