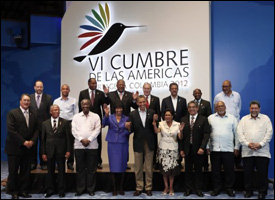 Caribbean leaders pressed United States President the Hon. Barack Obama for greater support in securing the Region from the traffic in illegal narcotics and small arms.

The leaders, among them St. Kitts and Nevis’ Prime Minister the Right Honourable Dr. Denzil L. Douglas, met in Cartagena, Colombia following the Sixth Summit of the Americas which ended on Sunday afternoon.

According to the CARICOM Secretariat, a wide ranging discussion included sharing of ideas on enhancing the role of small business, distance education, job creation, health, information and communication technology, new systems and rules in the US banking system, debt and the role of the G20 in assisting highly indebted middle income countries.

President Obama told the group which comprised Caribbean Community (CARICOM) leaders and the President of the Dominican Republic that the bonds between the two sides were deep and that his country had followed through on the initiatives identified at their previous meeting in Port of Spain, Trinidad and Tobago in 2009.

The US President, who was accompanied by his Secretary of State, Ms. Hillary Clinton and the US Trade Representative, Mr. Ron Kirk indicated that he had “personally invested in the Region” and assured that there would be follow through on the ideas presented at the meeting.