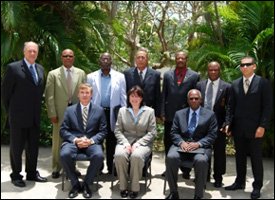 One of the region’s top law enforcement officers said there is a direct link between the rise in violent crime in the Caribbean and gun trafficking.

Chairman of the Association of Caribbean Commissioners of Police, Mr. Darwin Dottin said a study has shown that there could be as many as 1.6 million illegal guns in the region.

Speaking at the signing of a Memorandum of Understanding (MOU) with a United States law enforcement agency which will greatly enhance their ability to track and fight firearms trafficking and illegal possession in the region, Mr. Dottin, who is also the Commissioner of Police in Barbados, said that the eTrace system would better equip police forces to “gauge the flow” of illegal guns in the region.

Nine Caribbean islands have signed the MOU at a ceremony at the home of United States Charge d’Affaires to Barbados and the Eastern Caribbean, Mr. D. Brent Hardt.

St. Kitts and Nevis Commissioner of Police, Mr. Austin Williams was among other Commissioners and senior officers from Anguilla, Antigua and Barbuda, Aruba, Barbados, Curacao, Dominica, Grenada and St. Vincent and the Grenadines who initialed the document.

United States Deputy Assistant Director of the Bureau of Alcohol, Tobacco and Firearms and Explosives (ATF) Julie Torres signed on behalf of the agency.

eTrace is a paperless firearm trace submission system that is accessible through a secure connection to the World Wide Web.  This Internet application provides the necessary utilities for submitting, retrieving, storing and querying firearms trace-related information and allowing for the systematic tracing of firearms recovered from crime scenes.

Analysis of firearms trace data can assist in the identification of firearms trafficking patterns and geographic profiling for criminal hot spots and possible sources of illicit firearms.

The MOU establishes conditions of the partnership between ATF and those countries regarding policy and procedures for the access and use of eTrace services made available to law enforcement agencies.

U.S. envoy Hardt told the ceremony the event represented another “important step forward in the longstanding tradition of close law enforcement cooperation between the United States and the Caribbean.”

He said coming out of the U.S. ““ Caribbean Conference in 2007 the region and the U.S. and the region both realized the rising threat from the trafficking in small arms and lights weapons and joined forces to fight it.

“Recognizing our shared desire to protect our citizens, CARICOM and the U.S. resolved “˜to combat illicit arms trafficking relentlessly through vigorous co-operation.’ To do so, our countries agreed on a number of measures including the strengthened import and export controls, better information sharing on those involved in illicit trafficking, and new efforts to promote the tracing of firearms recovered in connection with illicit activities,” he noted.

Dr. Hardt said currently over 2,000 law enforcement agencies in the United States subscribed to eTrace and information derived through that program had helped in the investigation of thousands of crimes.