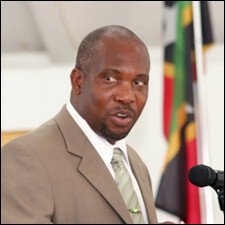 Building without permission from the Physical Planning’s Building Board on Nevis will not be allowed to continue.

Minister with responsible for Physical Planning and the Environment in the Nevis Island Administration Hon. Carlisle Powell, gave the warning during his contribution to the 2010 Budget debate, when the Nevis Island Assembly sat recently.

“There are still some people who continue to build without any permission from the Building Board. Some of the buildings are well above the 1,000 foot line. I want to make it clear that such unauthorised developments will not be allowed to continue.

“The onus rests and remains with all of us to protect Nevis so that our children’s children can enjoy what we now enjoy. In fact, the full penalty of the law will be brought to bear against individuals and developers who break the law,” he said.

Meantime, Mr. Powell commended the employees of the Department of Physical Planning and Environment who he said performed a difficult job admirably.

He explained that the Department continued its thrust to implement a process of orderly development, under the Physical Planning and Development Control Ordinance which came into being in March 2006 and had met with much success in 2009.

The achievements included the submission of a Physical Development Plan to Cabinet in August 2009; 270 building applications were processed and revenue collections amounted to $152,582.58 by October 31st 2009.

According to Mr. Powell, the Department also made a submission to Cabinet for the declaration of a protected area for the Nevis Peak Camps River Watershed Protected Area Project and continued its compliance with International Conventions which included the St. Georges Declaration of Environmental Principals, Climate Change and the Convention to Biodiversity.