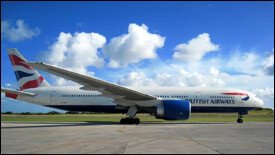 Minister Skerritt, who is in the British capital for the annual World Travel Market (WTM) says the new British Airways service “reinforces and supports a key part of the tourism strategy for St. Kitts which is to increase high-end tourism.”

“I applaud BA for expanding its Caribbean itinerary at a time when other airlines have been reducing capacity,” said Minister Skerritt.

The new British Airways flight between Gatwick and St. Kitts will be key in developing upmarket tourism on the island.

BA will start operating the Saturday flight to Antigua and St Kitts from January 10 next year on a Boeing 777 with 40 Club World, 24 World Traveller Plus and 216 World Traveller seats.

Minister Skerritt said BA’s inclusion of Club World seats meant it would be easier for UK operators to sell both islands.

St. Kitts and other islands were badly hit by the collapse of XL Airways. They are also hoping European passengers will make up for a big drop in US visitors.