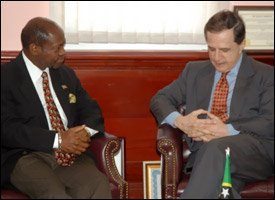 “It has been a pleasure and a delight to have had you serve as Brazil’s Ambassador to St. Kitts and Nevis. During your tenure you have been able to solidify the relationship, especially since Brazil has become the voice of the developing world in a “˜loud way’ and has taken its rightful its rightful place among the nations and has helped the Caribbean region in several ways,” said Dr. Douglas, who is also Minister of Foreign Affairs.

Ambassador Oliviera, who paid his farewell visit to St. Kitts and Nevis, was praised for Brazil’s assistance to the Caribbean and Prime Minister Douglas singled out that nation’s assistance to the OECS under which Brazil has made it possible for HIV/AIDS patients to have universal access to treatment and care.

The Brazilian diplomat said he was happy to facilitate the improvement in the relationship between Sao Paulo and Basseterre.

Ambassador  Oliviera who arrived in the federation on Sunday also paid a courtesy call on His Excellency the Governor General, Sir Cuthbert Sebastian.

The Brazilian diplomat began his diplomatic career in 1967 and has served countries such as Australia, Greece, Canada and the Caribbean among others. Ambassador Galveas Oliviera resided in Barbados and was accredited to St.Kitts and Nevis since 2002.