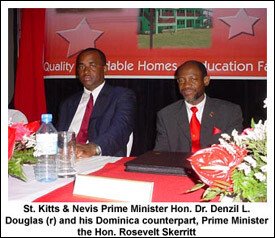 30 Years Of Independence For Dominica
Photo By Erasmus Williams

St. Kitts and Nevis has wished Prime Minister of Dominica, the Hon. Roosevelt Skerrit and his people best wishes on that country’s 30th Anniversary of Independence.

“As you celebrate this landmark occasion in the history of your country, I pray for continued strength as well as prosperity for the people of your country in these challenging and unpredictable times,” said Prime Minister Hon. Dr. Denzil L. Douglas in a congratulatory message to his Dominica counterpart.

Dr. Douglas, who is also Minister of Foreign Affairs, hoped that as Prime Minister Skerrit continue to guide the people of the Commonwealth of Dominica, “God’s  blessings will reign over all your current and future accomplishments.”