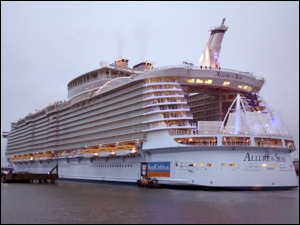 Royal Caribbean’s – Allure of the Seas

St. Kitts and Nevis‘ Minister of Tourism Sen. the Hon. Richard “Ricky” Skerritt continues to chalk up successes in the cruise ship industry.

Just back from a visit to Florida where he held several discussions with Florida-based cruise lines, Minister Skerrit has announced that the Allure of the Seas, Royal Caribbean International’s newest and largest Oasis-class cruise ship, will be calling at St. Kitts’ Port Zante cruise pier on December 30, 2011.

The announcement is regarded as a testament to the growing infrastructure and continuing appeal of St. Kitts as a vibrant, authentic Caribbean destination for leisure tourism.

He said “while Allure of the Seas is the world’s largest and most revolutionary cruise ship, the ship’s ports of call are also very important to our guests.  We look forward to bringing more of them to beautiful and vibrant St. Kitts.”

“I am proud of the fact that St. Kitts has been making great strides forward in the cruise industry,” said Minister Skerritt, who is also Minister of International Transport.

“Our arrival numbers have increased steadily over the past four years and I am especially pleased that the passenger satisfaction level for our destination has also been on the increase. The upcoming visit to St. Kitts by the newest and largest ship in the world, Allure of the Seas, will be a very special event for our destination.”

Allure of the Seas features 16 decks, 2,700 staterooms and carries 5,400 guests at double occupancy that could potentially disembark at St. Kitts.  The ship’s “neighborhoods,” or sections of the ship, are divided into seven themed areas: Central Park, Boardwalk, the Royal Promenade, the Pool and Sports Zone, Vitality at Sea Spa and Fitness Center, Entertainment Place and Youth Zone. The ship alternates between western Caribbean and eastern Caribbean seven-night itineraries, starting from its home port in Florida.